Our Little Night Out

I'm so sleepy. Stayed most of last night at the ER of Makati Med. The hubby had LBM and was vomiting for two staright days. Although it only happens right after he eats so he wasn't that dehydrated when we got to the hospital. But it got me scared right after he vomited last night. I thought he was supposed to be feeling well when I got home...but it wasn't the case. So off we went to the hospital around 9pm. There were so many people when we arrived. We were admitted around 9:15pm. In Makati Med the drill is there's a door just for the patients so they do the triage there, then get the patient's BP, get their info. Then we proceeded to the information desk, where they asked another bunch of questions. Since Joema was so weak at that time, I answered the questions for him. He was then asked to proceed to primary care while I answered the basic questions. He was handed a paper which was the form filled up right after we entered which he then gave to the nurse in primary care. And then I was handed a paper too by the lady in the information desk. Stupid me I wasn't able to hand it immediately to the nurse in the primary care area. We were waiting there for God knows how long before I realized I should give "my" paper to the nurse. Gah! I though Joema's paper was the only thing they needed. Yikes! After almost an hour of waiting, he was called by the doctor, asked him how he's feeling, poked around his tummy and then we were asked to go back to the waiting area. Medicine was administered to him then stool sample was collected and then we waited again. It was past 1am when we left the hospital. I'm okay with the waiting but all the while we waited, Joema was sitted on a chair, he wasn't even asked to lie down! I don' want to argue with the nurses, Joema might get stressed out with that. And they have a big sign there that says something about how the doctors won't treat the patients on a first come, first serve basis but rather on the severity of the illness which was ended with the sentence..Please be patient. So yeah how's that for pun. Joema wasn't complaining about the situation so who am I to complain. I just wished he was lying down so he could have taken a nap while we were waiting. Haaay! Thank God, everything was okay. No bacteria found in the fecalisis and that it was just stomach flu. He was given hydrite tablets and some other tablet for his tummy ache.

Photo of the primary care area. This was around 12:30am. Only a handful of people were waiting but when we arrived more plastic chairs were there for the patients. 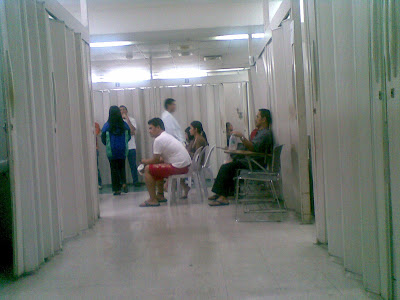 Email ThisBlogThis!Share to TwitterShare to FacebookShare to Pinterest
Labels: health, the husband