You've started talking and I'm so happy that your first word is Mama - although you pronounce it Mum-ma! You first said it when I started doing your Halloween costume. I think you thought I wasn't paying attention to you and you got jealous. Hence, you started calling me - Mum-ma, Mum-ma, Mum-ma! At first I thought it was some random syllable you were saying - because most of articles I've read said that babies don't really associate their first words (usually mama and papa) to the persons identified with the words. But but but not you, Anak! You knew it was me because everytime you say it, you'll look at me with outstretched hands. Oh the joy!

One thing I also noticed, you've been extra clingy ever since. When I was sewing your costume, I would put you to sleep first and then go back to my little project. But every single time, you wake up from your sleep and cry as if asking me why I wasn't asleep beside you. There was even that one night when I went down to go to the bathroom when you finally went to sleep only to get back upstairs with you awake and crying in Daddy's arms. Nowadays, I can't even go to the bathroom without you crying. I'm happy you can't seem to get enough of me but deep down I'm also getting worried  you're starting to have separation anxiety. Which is a bit weird because you're not like that when we leave the house in the morning. Our ritual is, you go down with Mommy and Daddy to the lobby and you see us off. I wave and wave and wave goodbye to you from the car but you don't seem to care hehe. I think you were more mesmerized looking at everything outside to care that we're even leaving.

I'm extremely happy that you're really showing your personality now but sometimes I get sad because you're also starting to be a little girl and no more a baby. Anak, don't grow up too fast. I love you very much! I want to enjoy every single moment of your life. I don't want us to hurry.

Our first choice of Halloween costume for Miya is the Ferrari outfit we had bought from SG when our friends went there. Oh yeah she's going to be an F1 driver. Complete with shoes and steering wheel.

But one morning while I was putting Miya's hair up in a ponytail, the hubby said in observation that she looked like a samurai. So I thought why not put her in a kimono for Halloween! When I told a friend about it, she immediately said "Why not Flintstones instead?" I got excited about this. We originally intended to do Wilma with the big pearls and all but in the end she went as Pebbles because she's still a baby. I knew I wanted to make the costume for her so I headed on over to my most recent favorite site, Prudent Baby, for a step-by-step guide on how to sew a simple dress for Miya. I chose the hipster swing dress because it's the easiest one on the site.

By Tuesday, I had all the materials I needed. 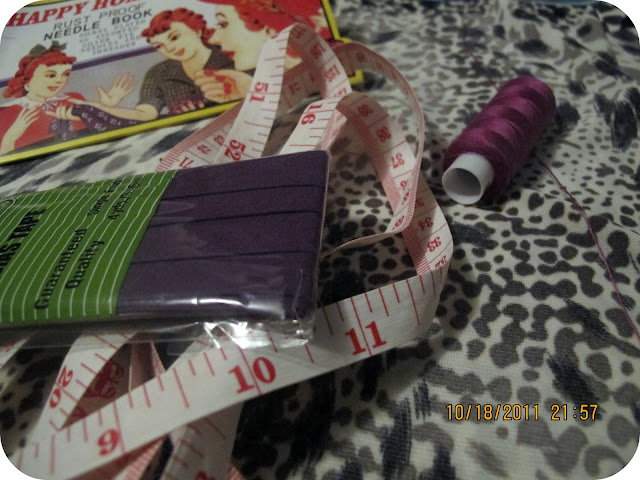 For Miya, I've cut the fabric 13"x27". I didn't have a sewing machine so I did everying by hand. Yes, running stitch and whip stitch only. I was not able to sew anything on Tuesday but by Wednesday, I was pretty much done with the dress. The bias tape I've bought was only single bias, no double bias tape was available so I sewed two singles together. This is how it looks like inside - not clean but it doesn't show on the outside so I was pretty happy with myself. 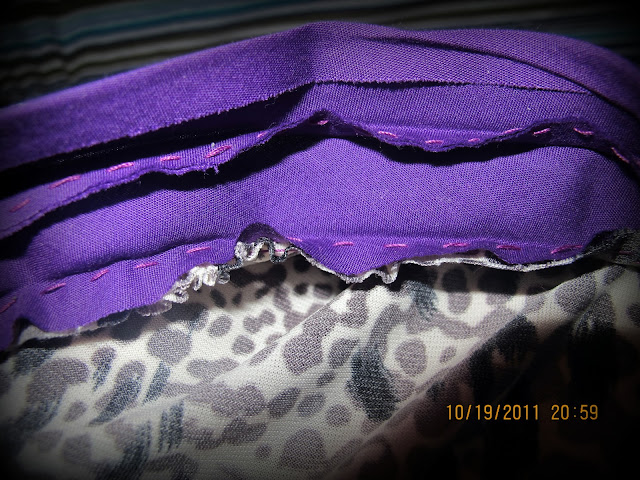 By the end of Wednesday, this is what I've done. 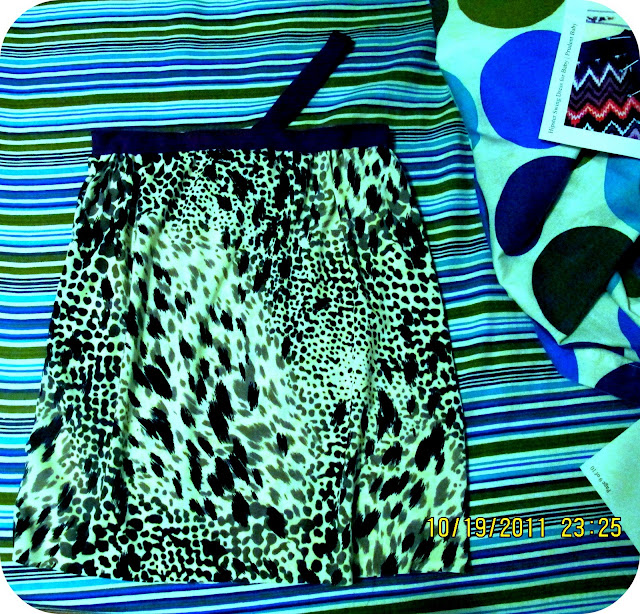 Thursday night I did the diaper cover and the flower accent in the front. Prudent Baby has a pattern for diaper covers but I just used a spare one from Miya's closet. I deconstucted it and used it as a pattern. But in hindsight I should have used the pattern from the site hehe. Prudent Baby used a button as accent in the front of the dress but I don't know how to do that so I figured I'll put a flower instead. I used their DIY fabric flower but I had a hard time so I ended up with just 3 petals heehee.

I had the dress and diaper cover washed by the yaya on Friday so that I can continue adding the snap at the back and cutting the scallops at the bottom. We slept at my parents house on Saturday night so my mom helped me with the snap. I actually used a hook instead of a snap. Do you want to see how it turned out? Click click click..

The other I looked in the mirror and got annoyed at how I look. Tired face and lousy/crinkly outfit - blech! So I decided the next day to do whatever it takes to look and feel sharp! So here are my resolutions for a new me:

1. Put on make-up every day - I have all the basic things to put a nice make-up on. Sure my make-up essentials are not from high end brands but I have liquid foundation, mineral face powder, blush-on and lipstick. But sometimes I don't even want to bother putting on face powder and lipstick. And that day after feeling so lousy I tried putting on eye make-up (eye shadow and eye liner). Well, what do you know, it instantly made me look alive. As in! The eye make-up opened up my eyes (literally and figuratively)! Another tip I got from other make up enthusiasts - red lipstick! So next time I'm too lazy to do the works (yes, for me that's already THE WORKS), I'll try putting on just face powder and red lipstick.

2. Take care of my skin - I'm so lazy to put moisturizer on my face and lotion on my body. That's the truth. And I think, this has already caught up with me. My face always looks tired and dry. So from now on, I vow to slather on moisturizer every morning and every night! That goes with my body too.

3. Build my wardrobe - I was inspired by the series of posts from Manila Fashion Observer on building your wardrobe. Please click the link because she has explained it better than I could ever explain it. And you know, it totally makes sense! So for starters, I've started giving away the clothes I have packed away that are too small for me now that I've given birth. I don't want to illusion myself that I can still go back to XS. Although, it's worth noting that I can still fit into some of my pre-pregnancy clothes so I've kept those. Next, I won't buy unnecessary and cheap clothing. I don't want to have piles and piles of clothes but still every morning say to myself "I don't have anythign to wear." I will invest in classic, timeless pieces. The first on my list is a white button down shirt. Do you have any suggestions? As for undergarments, I want to buy those "no VPL" undies MFO is recommending.

Those are the things at the top of my head and will probably include some more if I think of anything else.

How about you, have you done anything recently to improve your self?