Go placidly amid the noise and the haste, and remember what peace there may be in silence. As far as possible without surrender be on good terms with all persons. Speak your truth quietly and clearly; and listen to others, even to the dull and the ignorant, they too have their story. Avoid loud and aggressive persons, they are vexations to the spirit.

If you compare yourself with others, you may become vain or bitter; for always there will be greater and lesser persons than yourself. Enjoy your achievements as well as your plans. Keep interested in your own career, however humble; it is a real possession in the changing fortunes of time.

Exercise caution in your business affairs, for the world is full of trickery. But let not this blind you to what virtue there is; many persons strive for high ideals, and everywhere life is full of heroism. Be yourself. Especially do not feign affection. Neither be cynical about love; for in the face of all aridity and disenchantment it is as perennial as the grass. Take kindly the counsel of the years, gracefully surrendering the things of youth.

Nurture strength of spirit to shield you in sudden misfortune. But do not distress yourself with dark imaginings. Many fears are born of fatigue and loneliness. Beyond a wholesome discipline, be gentle with yourself. You are a child of the universe, no less than the trees and the stars; you have a right to be here. And whether or not it is clear to you, no doubt the universe is unfolding as it should.

Therefore, be at peace with God, whatever you conceive Him to be. And whatever your labors and aspirations in the noisy confusion of life, keep peace in your soul. With all its sham, drudgery and broken dreams; it is still a beautiful world. Be cheerful.

Strive to be happy.

An officemate came by today to make chika about her recent trip to Hong Kong, but somewhere along the chickahan she talked about Desiderata and that she's writing it down in a small notebook to give as a gift to her son. She said she's been living by these principles and read a few bits of it to us. I admit it's the first time I read it although "Desiderata" sounds vaguely familiar. It's beautiful isn't it? And her idea of giving it as a gift is wonderful!

Have a blessed Christmas everyone!
at December 24, 2008 No comments:

Email ThisBlogThis!Share to TwitterShare to FacebookShare to Pinterest
Labels: inspiration

Wedding Photos are Up

Yehey! Jayson blogged about our wedding (nawala ata yung sakit ko nung nakita ko mga pictures) and I'm pasting all the photos he posted here at my blog mwehehehehehe. But head on over to his blog to see all his other couples. We actually have the CD for a few weeks now but we haven't got the time to sort everything out. So thank you so much for this, Jayson! And belated happy birthday sa photographer naming asteeeeeeeg!!! 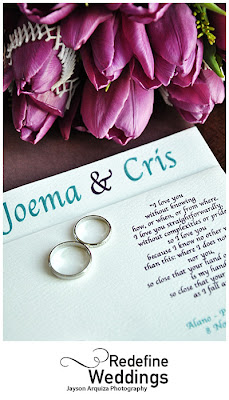 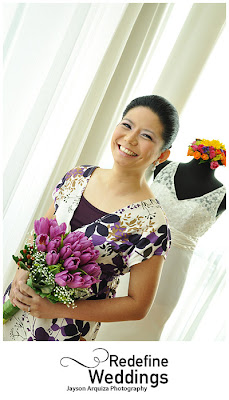 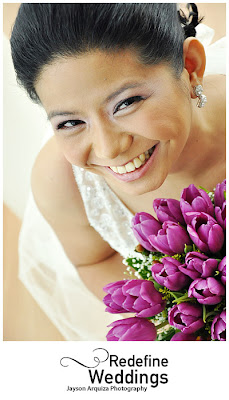 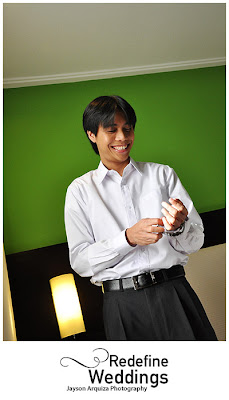 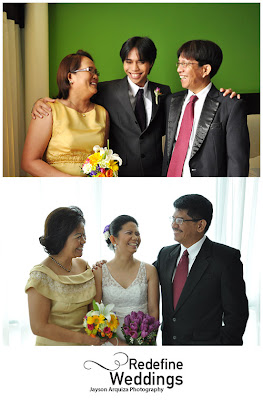 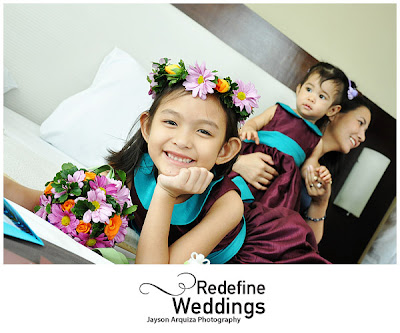 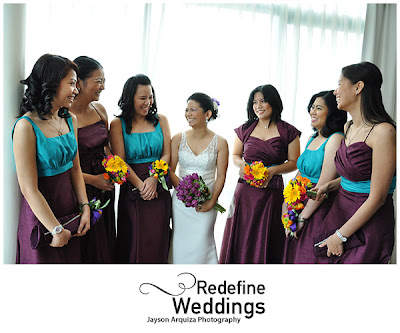 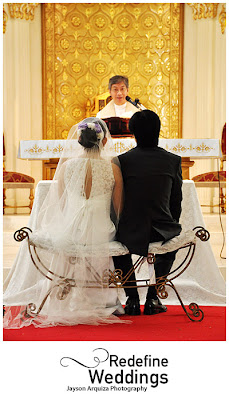 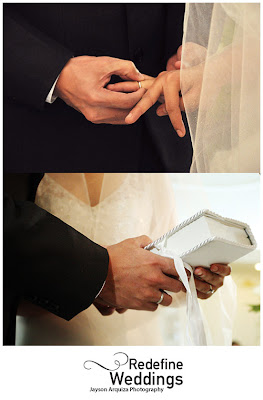 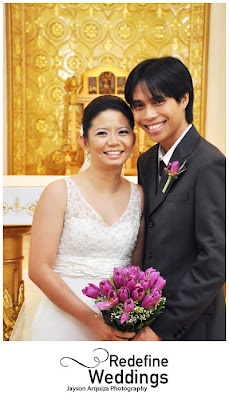 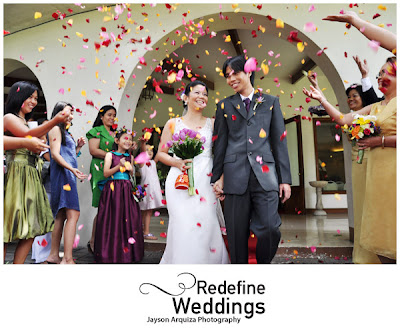 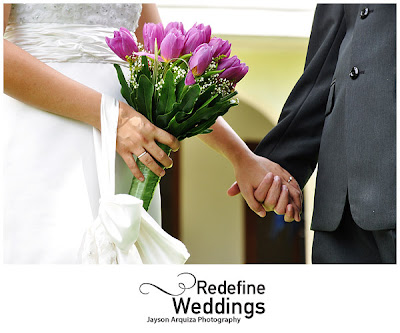 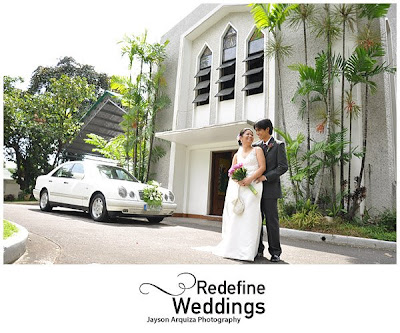 Email ThisBlogThis!Share to TwitterShare to FacebookShare to Pinterest
Labels: wedding

I'm not feeling so good since yesterday. :( I've been popping pills since I woke up yesterday afternoon. Must be because of the cold weather plus we slept in late last Saturday night, or should I say Sunday morning. Anyhoo, Christmas is just around the corner and we haven't finished shopping for Christmas presents yet. Promise, next year October pa lang mamimili na ko ng gifts.

My mother-in-law gave us some Christmas decors which we've used in our little home.
Little santa penguin and dog (?) with an angel 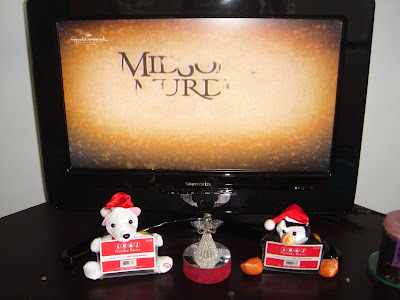 Christmas ribbon by our bathroom door; detailed shot of the ribbon 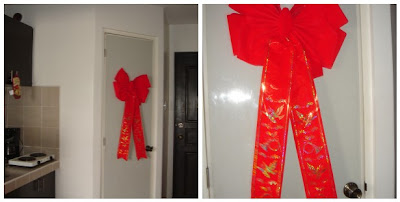 Decors by the stairs; view from the top 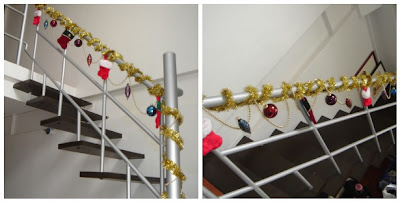 Email ThisBlogThis!Share to TwitterShare to FacebookShare to Pinterest
Labels: Christmas

Before I blog about my first adobo let me tell you first about my cooking skills, or lack thereof. I don’t really cook. In our family, I’m the only one who doesn’t know how to cook. So when my brother and I are left at the house he’s the one who has to cook and I wash the dishes haha. There are only two times in my life when I attempted to cook - the first time was when we didn’t have a maid and I cooked tinola, I remember having to taste the dish every so often because I was afraid it won’t taste right, by the time it was cooked and ready to eat, I didn’t eat anything at all. The second time was when I cooked a simple pasta dish for Joema, I don’t remember if it was his birthday or it was our anniversary. My problem is I don’t know how to tell if the dish is cooked already - I know everything in theory but I don’t know anything in real life haha!

One of the wedding gifts we received was the George Foreman grill. I figured it will be a breeze cooking in this thing. So we bought chicken breasts and barbeque marinate. The manual of the grill says that the chicken should be cooked in 9 minutes. I set the alarm in my cellphone to 9 minutes and popped the chicken in the grill. After a while, I started smelling something – not like when someone is cooking. Basta it smelled and I was afraid I was going to burn the chicken. And then I heard a toot toot tooot. I was panicking already and telling Joema that it must be a fire alarm or I’ve set the smoke detector of our unit. Joema followed the sound and he tells me “E yung cellphone mo lang yun e nag-aalarm!” holding up my cellphone for me to look at. LOL That was hilarious! I was ready to call someone downstairs to help us. But anyways, inspite of the anxiety attack that chicken caused me..it tasted good (thanks to Mama Sita haha!) But suffice it to say, we haven’t used the grill after that.

I’ve only ventured into frying chicken and pork after that. Or we buy cooked dishes. The other day, I attempted to cook my very first adobo. I know it’s a simple dish for those who really know how to cook. But it’s still a milestone for me – cooking something that’s not fried haha. And I used other ingredients other than salt, pepper and oil *teehee*

Pork adobo (recipe from Maya Kitchens cookbook, which was lent to me by an officemate) 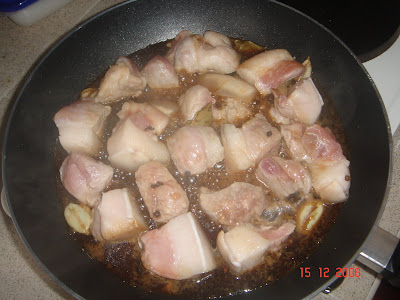 Bring to a boil then simmer uncovered until pork is tender. Remove meat from sauce. 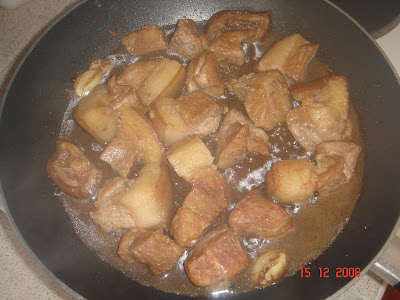 In a skillet, heat oil then sauté remaining garlic. Add meat and fry until light brown. 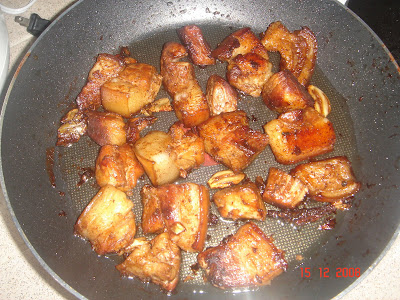 
We only bought half-kilo of pork so I divided every measurement of the ingredients by two. Nasarapan naman si Joema. :-)
at December 17, 2008 6 comments:

Email ThisBlogThis!Share to TwitterShare to FacebookShare to Pinterest
Labels: cooking

Here are my answers to your questions:

1. POSD is Public Order and Safety Department. The family planning seminar is held at the back of the POSD building. Parang walang phone line dun sa mismong place where they hold the seminar pero here's the contact number that I get in touch with to ask questions...697-1325.

Here are my related posts regarding the marriage license application in Antipolo City Hall.

Best to call the contact number I gave you if you have other questions na hindi ko nasagot :)
at December 16, 2008 No comments:

I can’t believe it’s been a month since the day we said our “I Do’s”. Yes it’s been 30 days since our wedding and I haven’t finished blogging about it. Yikes! I don’t think I’ll be able to blog about it in one go because of work (year-end is hectic!) and Christmas is just around the corner (we haven’t started shopping for gifts yet! Sooo bad!). We haven’t received our CD from our wedding photographer yet. They’ve been busy with work also – can’t blame them because December is the busiest season for wedding suppliers.

I only realized that it’s our “monthsary” when I got here at the office and changed my date stamper to the correct date. So it was a delightful coincidence that Joema prepared my baon for today. It's the first of, I hope, many more baon preparations to come hehe. 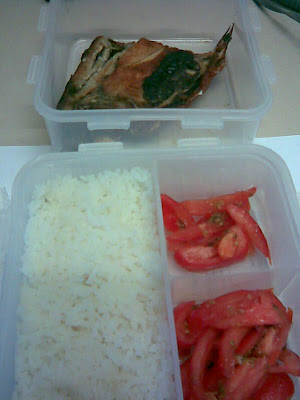 I fried the fish last night but he was the one who cooked the rice, cut the tomatoes and put them in their containers.
at December 08, 2008 6 comments: