Let me continue our HK Disneyland stories. Links to my previous posts are here:

For our second day at the park, we actually got to spend most of our time with the Fongs and Bernartes. Our first agenda of the day, have our photo taken with Mickey and Minnie Mouse! Because of the long queue, we finished right around lunch time. 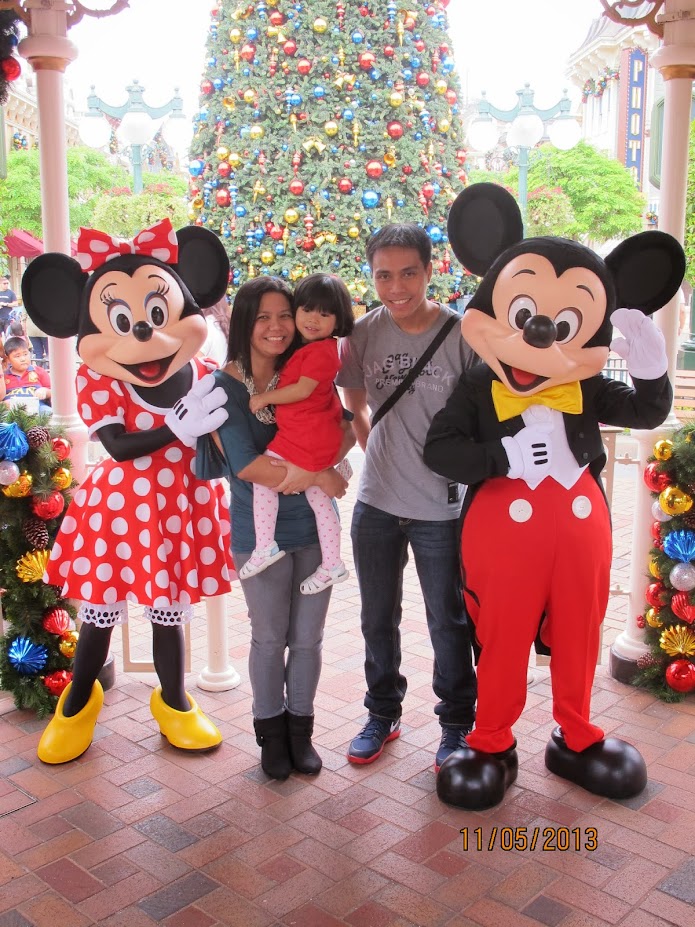 So after lunch, Miya took her nap. It was our time (Joema and me) to explore the park again on our own. We rode the Grizzly Gulch and then went back to Miya so that my parents can do their own exploring.

More photos of the parade after the jump...

She woke up this morning and immediately asked for the hula hoop her Lola (grandmother) gave her yesterday. Then she went back to sleep looking like this. Oh my little girl!

﻿
I'm joining this 52 week project over at Practising Simplicity (which I found out from Riz). I'm actually late for week 1 and was not able to join but I'm still posting this here. It's so fascinating how much kids grow so fast. When we look at photos and videos of Miya for the year 2013, we get amazed at how much she has grown. So I'm joining this project so that I can look back one year from now how much my daughter will grow in 2014. It's only week 2 so you can still join. I'll post my entry for week 2 within the week.


First agenda of the day was mass at SM Megamall. It's our first time to hear mass at their chapel with Miya in tow so we went to the children's area at the back. We arrived pretty late so the room was jampacked. One thing I notice with Miya is that she quiets down when there are other children. So she was awfully quiet while we were there. Yun lang biglang nag-aya to go to the bathroom kasi napoopoo na daw sya (yes, we're completely off the diaper!) hahaha. When we got out of the chapel and went to the bathroom di naman pala nya gusto magCR haaay. So I just changed her clothes because the pants she was wearing were a bit too loose on her waist. Anyways, since we didn't have time to attend the next mass because Joema was due for a check-up at the MegaClinic (he went there to have his name listed before he went to the chapel to meet with us) we opted to take Miya to the dentist (Little Ones Dental Clinic). This time Joema left us so that he can have his haircut.

We waited for a while for Miya's turn but when it was her turn, she was very brave! She sat by herself on the chair while I stood in front of her.


After the dentist checked on her teeth, I was told that she already had cavity in four of her molars - two on the lower left side and then another two on the lower right side which should be filled in (correct dental term?). Her cracked two front teeth can be treated with dental filling but the dentist recommended using crown instead because this will be more durable. I asked the dentist if we could try doing the pasta* on one of her right molars. The dentist said we could try if Miya can handle the drill before putting on the sealant and then she also recommended that we do the two teeth in one sitting instead of just one. So I agreed. The dentist then told Miya that she will put something inside Miya's mouth and that it will only be water (the drill has water spilling out). After the instructions from the dentist, Miya held out her hand for me to hold (my heart melted). After I held her hand, the dentist did the procedure. So what turned out to be just a normal checkup turned into a dental filling of her two molars. And she was so patient and calm all throughout. I still can't believe it! If you know my daughter personally, you wouldn't believe it, too. She's a kiti-kiti, she won't stay put for a mere 30 seconds. She seems to be moving about anywhere and everywhere. So this is really a milestone for her and I couldn't be any prouder!!!

When we got out of the clinic, Daddy was already waiting for us with his new haircut. We went with him to MegaClinic but his cardiologist went out so we had to wait. As I've said, Miya can't sit still so I had to take her for a walk until we saw this kids' place along the 5th floor of SM Megamall. I asked for the rates because I figured it will be a good way to while away time while waiting for Joema's check-up to finish. And then I told her we need to go back to the clinic to get money. But by the time we got back, Joema was already inside with his doctor. After a few minutes their consultation was done. Miya and I didn't have time to go back to the play area. I thought Joema wanted to go straight home because we were with his brother and his brother's girlfriend by that time. As Miya's about to throw a tantrum, Joema allowed her to go to the play area. We stayed there for a good 30 minutes. I'm surprised with the efficiency of their system. They take a picture of the kid and the companion so that they can log in your time. And then when you're time's up, they announce the name of the kid over their PA system and then check if you are the one with the photo they have on record. Galing! With Gymboree kasi since it's a small place, they only put a sticker on the child with the child's name and time and length of stay in the gym area.

Anyhoo, Miya had a blast. Albeit the annoying girl who got the ball Miya was playing with when Miya dropped it at the ballpit.  And since she saw Miya throwing a fit because she wants the ball, the little girl didn't want to let go. Well, she's not so little anymore I think she was about 8 years old already. I had to tell Miya not to cry in front of the girl because she's deliberately holding on to the purple ball to annoy Miya. So when that girl dropped the purple ball, I dove and got the ball haha! Yes, pinatulan ko yung bata hahaha! And then I immediately took Miya out of there.

When it was time to go home, Miya was exhausted. She fell asleep on the car on the ride home. When she woke up, she played with her Tito and Tita who came home with us.

In the evening, we passed by Policarpio Street to see the Christmas-lit houses! After 5 years of living in Mandaluyong, we finally saw this much talked-about street during Christmas time. 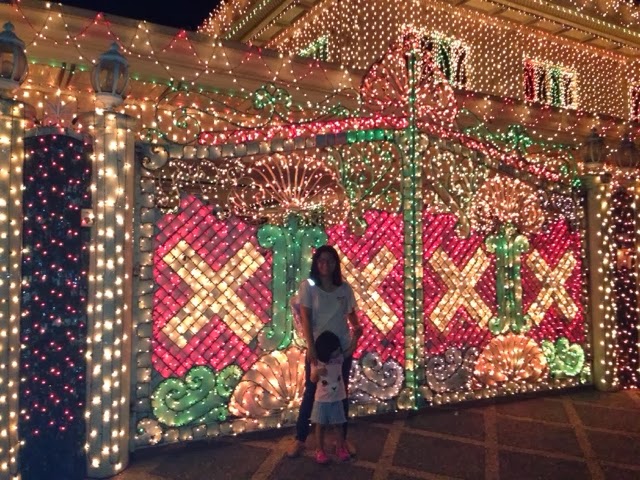 That was our tiring Sunday but we all enjoyed it. Hope you enjoyed the Holidays.

*We call the sealant on her teeth pasta. Last night she mentioned that her teeth has "pansit". We were confused. Until Joema realized, Miya meant pasta. As in pasta and pansit are both noodles and she mixed up the two. LOL!