You know how I totally "careered" last year's Halloween costume for Miya? Well, this year I didn't DIY her costume. But I still thought hard about it and it wasn't a ready to wear costume. I initially wanted her to be Boo from Monster's Inc. I think they look alike.

Miya would've pulled this off. I was actually already teaching her how to say "Mike Wazowski". I only needed to buy her a red shirt and then I can buy dolls of Mike and Sulley which she can carry around while trick-or-treating. And then I thought, this is too easy hahaha! So I researched for other cartoon characters and I was led to this link. Boo really looked like Agnes from Despicable Me.


I thought I'll buy Miya the whole outfit and a big furry unicorn, and of course, teach her how to do that cheek thing. But the hubby vetoed my idea, saying that she won't be easily recognized as Agnes when we dress her as Agnes.

And then I remembered this photo I've pinned on Pinterest.

This was the inspiration to our very own Princess Leia... (reveal after the jump)


Bought everything separately. I was fortunate to score the white robe at SM Department Store. It was perfect! It's white, it's a robe but it's not a bathrobe. Score! But since it's short sleeved, I had to buy a longsleeved undershirt. I also bought those white tights (it's like a pantyhose for kids but in white and the material is the same with socks). We had her wear white shoes, too.

As for the hair, that was I think what really made the look. So I had to be extra careful in buying the hair accessories. I saw this really cool wig in SM that is already like a bun which I can attach to Miya's hair but one bun costs P400. So I went to Carolina's and bought black velvet cloth thinking I can do a rosette and attach it to my daughter's hair. And then I figured, I can do the exact same thing as the wig, instead of using hair, I'll use the velvet cloth. But I will be needing those hair nets that are already formed as a bun. Unfortunately, I didn't find any at the department store. I went back to Carolina's and didn't find it there as well. I had to make one last stop at Pink Box (the hair accessory store) and just tried my luck. I didn't find the hair net but I found this kind of scroungy that is almost a hair net that I can put over Miya's bun to make it look bigger. Well, I think it's purpose is really to hold buns together. Perfect again! Success! 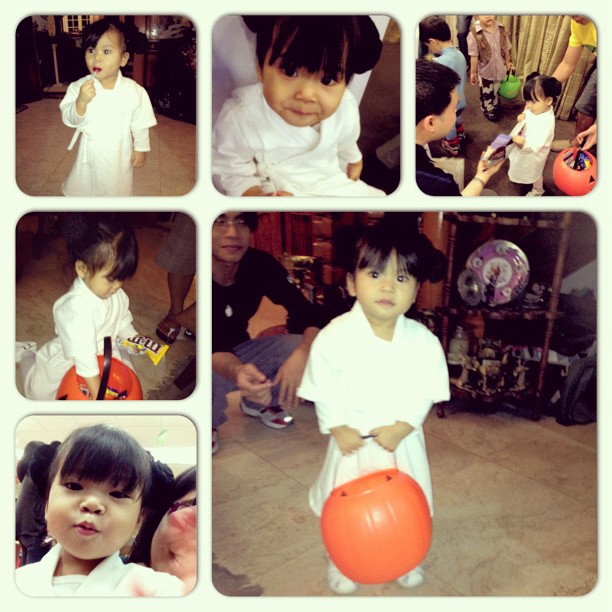